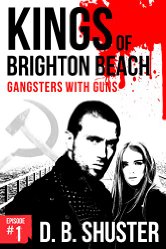 Kings of Brighton Beach, by D.B. Shuster, is a crime saga centered on the Koslovskys, a family of Russian immigrants with a shadowy past who, along with their associates, are the kingpins of the Russian-Jewish neighborhood of Brighton Beach, New York.

In Part 1 of the series, which is comprised of three episodes, we meet Artur, the patriarch of the family, a ruthless player in the high stakes world of organized crime. While he has managed to keep his true identity a secret from Inna, his beloved daughter and Achilles heel, he has powerful enemies, both inside and outside of his family.

Vlad, his newly hired henchman who has returned to the neighborhood after a decades-long absence, seems loyal enough, but, as with everyone in the Koslovsky’s circle, he is keeping his cards close to his chest. That is, until he reconnects with Inna, and Vlad begins to question everything he has ever known and believed about the past he has fought so hard to outrun, including his own ambitions.

Shuster wastes no time embroiling readers in the ensemble-cast-driven drama and tension that make up the seedy underworld of Brighton Beach. The settings are clear, the characters vivid, and the action peppered with authentic Russian dialogue. While the pacing of Episode 2 suffers slightly from excessive character building, Episode 3 makes up for it in both content and timing.

Some readers may be disoriented by the author’s decision to focus on a different character in every chapter, rather than on one particular main character or situation. But most will find that Kings of Brighton Beach is a well-written, exciting read full of jealousy, revenge, retribution, redemption and love. Satisfying in its own right, Part 1 lays a strong foundation that leaves readers curious to see how the author builds upon it in Part 2.