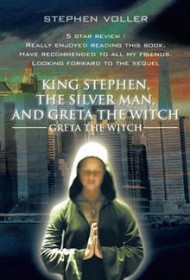 A staggering amount of characters accompany a bewildering number of storylines in this historical fiction/sci-fi hybrid, which author Stephen Voller says is the second in a series of five books.

While traveling in the English countryside in 1136, King Stephen of Blois, his two men-at-arms, and Greta the Witch encounter a silver man, an alien sent to monitor the earth’s progress and civilization. Following a burst of light, the four are suspended in time. Readers are then transported to England in 2012 where Dr. Keith Maxwell, after reviewing some interesting data from NASA, starts digging in a park nearby to find the source of increased particle activity, unwittingly releasing the group from stasis.

This single action unleashes a bevy of subplots, including the investigation of the murders of two passersby at the park; Greta’s union with two modern-day witches and their launch to celebrity through media exposure; the silver man’s capture and regeneration into a newborn baby, whom scientists name Jesus; and the plan to save Earth from an asteroid, courtesy of the silver man’s species.

While this is an inventive and promising set of premises, the story is relayed in a style that resembles plot summary rather than developed narrative. Every character, major or minor, gets an intricate backstory, while eponymous characters disappear for a third of the book before their stories are hastily wrapped up near the end. In addition, female characters either want and think about sex constantly or are generally described as unappealing: “quarrelsome and no pleasure in bed,” “looked like everyone’s ideal grandmother,” “one of the fattest people” one had ever seen, and so on.

The author explains plot points, rather than allowing the story to naturally make connections. Most confusing, however, is that this “sequel” is so self-contained, it’s hard to imagine what the first book could have been about.

In sum, this novel offers limited satisfactions, confounding more often than it entertains.