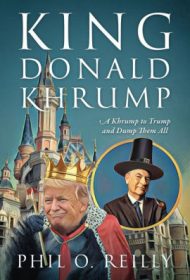 Decency and truth have taken a beating since Donald Trump became president, but rather than rant about the situation, the fictional Phil O. Reilly has resorted to an old standby: satire.

Reilly – actually author Brian Hill – narrates this account of King Donald Khrump’s first 100 days in office. He is a reporter for Fix News, an unabashed supporter of the new king.

Reilly’s Donald is a human-ape hybrid, the result of a collaboration between the Repugnican National Committee and the Fix network. Upon the death of his father, Donald takes control of the family business, becomes a reality TV star (How to Monkey Your Way to the Top), and gets into politics, where he is elected king.

Donald forms a close friendship with King Andre (also known as Pootypoo) of Pruska, who walks him around on a leash; as king, he corners the market on gold plumbing fixtures and proposes having his company sell fresh air and clean water to everyday citizens; once in office, he sets up “campgrounds” for “brownies” and “scarfheads.”

Over the top? Sure. But the current president has made himself an easy target for criticism, and his words and actions and the people he has surrounded himself with are often outside the normal realm of believability. That creates a very high bar for a satirist.

Unfortunately, while Reilly’s writing is clear and he makes his point, he lacks the piercing force of a skilled satirist. The situations are anything but subtle, even though there are snickers along the way, such as a reference to King Donald’s “powerfully gorgeous executive hair.” By the time King Donald is faced with the consequence of his actions near the end, readers will probably have already had enough.

Those who dislike Trump will find moments of glee here, although even they will likely grow weary of this exercise in Resistance. Suffice it to say that the president’s followers will not be amused.