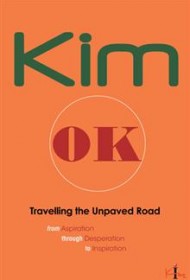 This slim memoir is teeming with details of the hardscrabble road journeyed by Kim Okran.

Born into poverty in rural Korea, Okran was the youngest of seven. Her father, who had been educated in Tokyo, regretted his arranged marriage to Kim’s mother, who was illiterate. He drank himself to an early death while Kim’s strong-willed mother supported the family by selling fish. Day and night she “carried heavy, wooden boxes on her head,” coughing and wheezing and “gasping for breath” as a result of her asthma. Young Kim wanted only to escape this pre-ordained life; she refused to walk in her mother’s shoes even as she realized then and later that her mother’s strength was the foundation for her own “toughness.”

Thus begins Kim’s story. She perseveres, working menial jobs, scrimping, borrowing and saving until she raises the money to go to Canada. She hopes to attend a university, but her struggles continue. The memoir takes many twists and turns – readers see Kim working long hours at a restaurant, donut shop, as a housekeeper and nanny — living frugally in order to pay for English classes and earn her degree. All the hurdles Kim faces are seen through the sharp lens of her unwavering determination. “Nothing good comes for free…We may go hungry sometimes but we will not starve.”

The story has many clichÃ©s (beginning with the book’s slogan: “Find Your Magic Button”), and has characters and events too numerous to remember or track (on one page, we go from Visa problems, to depression to a birthday party to Christmas). No detail is spared, which can make reading onerous. Even so, readers will cheer for Kim as she succeeds in meeting her business and life goals. This is a real-life story of an immigrant who has helped countless other immigrants from Asia, Africa and Latin America improve their lives. If for no other reason than that, Okran’s book is inspiring.

BlueInk Heads-Up: Despite the many grammatical errors and awkward prose, this is a book that will hold appeal for new and recent immigrants, particularly in Canada.