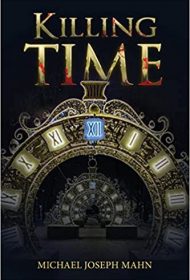 In Michael Joseph Mahn’s Killing Time, a once peaceful and lively city, New Orleans, now lies devastated in the aftermath of the recently dreadful hurricane, Katrina. To add to the jeopardy, looters and thugs have managed to throw the city’s glory to the ground.

Crime and atrocious events have earned the city an unwanted name: “The murder capital of America.” Dead bodies are overwhelmingly appearing in empty houses and buildings, with women being the greatest casualties. The food and shelter situation has deteriorated. New Orleans looks like a haunted ghost town.

An aggravated Henry Xavier O’Grady, a former district attorney, can’t understand how crime and anarchy took over in this once-safe and protected town. It seems like the only way to help the ailing city is by killing more and more thugs.

A visit to the cathedral to meet Father Flannery exposes O’Grady’s guilty conscience. It’s not the first time he has sought advice and forgiveness for killing thugs. Is this his ordained path or should he forsake violence and join his long-time friend Flannery in good works and love?

O’Grady is soon joined by Martin Montague, a key witness to the JFK assassination. Common enemies and dangers like the local gang, unfriendly workmates, and haunting memories force them to work together as they try to unravel truths and uncover mysteries.

The book delivers an engaging beginning that draws readers in while also introducing characters who feel authentic. However, the novel has one major frailty. The presence of too many dialogue scenes, many that feel repetitive or deliver mundane details, impedes the narrative. Long conversations often water down the action scenes and quickly become tedious.