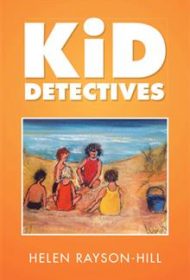 In Helen Rayson-Hill’s debut middle-grade novel, a group of friends reunite at an Australian seaside town, only to stumble onto a counterfeit ring.

Set in the ‘50s (and thus, refreshingly devoid of intruding cellphones or computers), the story features five children who gather at the same vacation spot each summer. Reveling in the coastal landscape, they spend their days swimming, gathering cockles at the shore, and playing hide-and-seek in the hollows of the warm sand dunes. But, one day at the beach, the group spies four suspicious, dark-clothed men arriving in a dinghy, with one man lugging a large, mysterious gunnysack on his shoulder. Disappearing behind the dunes, he emerges without the sack.  What could be in the bag, the children wonder. A body?

Soon, the men realize the children have spotted them, and threaten them to keep silent. Days later, the children find the hidden sack and discover it holds a bounty of cash. Unbeknownst to the girls, the two boys each take a ten pound note before shoving the bag back in its place, and complications arise when one of the boys uses the money at a local store, only to learn that the cash is counterfeit. The boy grapples with his conscience, terrified to confess, but fearful the innocent shopkeeper will go to jail.

This is a generally engaging story, with spot-on dialogue sprinkled with Aussie colloquialisms such as “bloke,” “mozzie,” and “dillybag.” The author also does a fine job of creating the five distinct characters. Although sometimes the narrative gets bogged down in minutia, such as detailed descriptions of the childrens’ meals, overall, the writing is smooth, and some of the author’s descriptions truly shine:  “Lennie was watching a beetle scrabbling its way up the hummock like a small Sherman tank, failing, tumbling back, then valiantly trying again….”

Young readers will love the fast-moving, funny showdown scene with the criminals, and by story’s end, they will likely be watching for mystery number two.