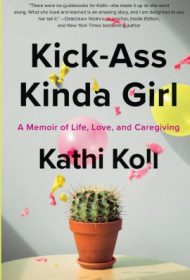 Life isn’t over yet for Kathi Koll, no matter how much loss she’s suffered. In this memoir, she proves with humor and compassion that, “As difficult as it is, life’s worth living. In the deepest and saddest moments, somewhere there is a flower just blooming.”

Koll narrates her life on two levels. On one, she mixed with celebrities, from childhood at an upscale Los Angeles grammar school on through her luxurious life with her second husband, real estate developer Don Koll. Her second-grade friend Lucie Arnaz arrived for a playdate in a limo with mom Lucille Ball. She and Don once lunched with George and Laura Bush at the White House and dined with General Colin Powell after The Kennedy Center Honors.

The deeper level is one of devastating loss. As an 18-year-old newlywed, pregnant with her first child, Koll lost her mother to cancer. Within a decade, her father succumbed, too. Within months of her father’s death, her eldest brother lost his battle with a devastating disease. And within six years of their marriage, Don was paralyzed by a massive stroke, unable to breathe on his own. Seven years later, Don died the night before Koll’s elder brother’s funeral.

During Don’s post-stroke life, he lived at home, cared for by Koll and live-in professionals. Koll details the toll his unpredictable emotions and physical limitations took on their lives to help other caregivers learn from her experiences.

What might seem an awkward union—a privileged, glamorous life and a series of painful good-byes—melds seamlessly. The author doesn’t flinch from explaining the emotional pain these losses caused, each in its unique way, or the help she needed to survive them, yet she never yields to self-pity.  Meanwhile, she brings her intimates, friends, and acquaintances alive through lively reconstructed conversations.

Ultimately, Koll comes across as a potential friend, someone who listens well and willingly opens her heart. Since she can’t be everywhere to help those who need her hard-won wisdom for moving forward, Kick-Ass Kinda Girl is a worthy surrogate.