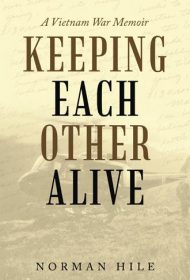 With his law school draft deferment classification lost and the war effort escalating, the author enlists in 1968, hopeful that Nixon’s “secret plan” will end the war during his year of training. But by summer 1970, the new artillery lieutenant finds himself on the front lines at Firebase 411, west of Quang Ngai City, one of the hottest areas of operation.

Based on letters written home, Hile vividly describes his challenging year in combat, first as an infantry “grunt” and field artillery officer planning weapons operations in support of infantry missions for the poorly staffed Charlie Company. “…if I was going to be in this horrible assignment for six months,” he writes, “I would either die of malaria or lack of sleep. I had no idea, however, how much worse it was going to get.” Later, as an aerial observer, he flies dangerous support missions in search of enemy artillery operations.

Hile writes with clarity and purpose. Chapters are short, chronological vignettes that keep the narrative moving, and technical descriptions of missions are well crafted. Hile’s reflections questioning clumsy military protocol add narrative depth. The author often refused to comply with wrong-headed orders, flirting with court martial more than once. He also recalls being informed in his final week that he would be awarded 15 air Medals, a Bronze Star, and a Purple Heart. But after witnessing his less-than-admirable captain simply apply for and receive a Silver Star of Valor, Hile, disillusioned, realizes how meaningless such honors are.

An Appendix of small photocopies of his handwritten letters and fuzzy snapshots of daily combat life add little to the presentation. Still, this is a convincing tale of a poorly fought, un-winnable war. Hile delivers colorful personalities, impactful tales of soldiering, and more. Intriguing for general readers, this memoir will also enlighten students of the Vietnam conflict.