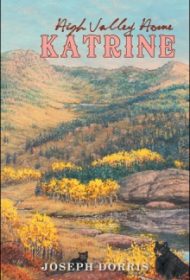 In this engaging coming-of-age novel for young adults set in the 1860s, a Swedish family faces challenges from man and nature to build a settlement in pre-Idaho Territory.

Nine-year-old Katrine Larson is traveling with a wagon train of Swedish families hoping to build a farming community out west. When Katrine’s family falls behind the rest, the Olafson family volunteers to take Katrine with them, until her family can catch up. Once the settlers reach their destination, they face harsh winters, desperadoes, the possibility of Indian attacks, destructive fire and premature death. Some give up and the small community shrinks to less than a handful of families. As the years pass, Katrine doubts her parents survived the trail but never gives up hope that her older brother Erik will one day appear.

This is the fourth in a series by Dorris about life in the Idaho territories and the second about Katrine and her family. The books are well researched and take readers on the difficult journey settlers faced in the rugged West. Dorris chooses interesting details that capture the characters’ everyday lives even as they face survival: When Katrine becomes a young woman, for instance, the hem of her dress is lowered to a more modest level. Because the settlers are Swedish, their customs also add a nice touch, from their joyful Midsummer Eve’s celebration to baking fattigma (fried cookies).

Katrine is a nice complement to the others, although Dorris could have quickened the pace and reduced repetition; he frequently mentions how often Katrine and others visit the hot springs, for example, while giving short shrift to other plot points, such as how one of the settlers escapes from her kidnapper.

Still, this and the other titles are a treat, offering well-written escapades that immerse readers in a time and place and underscoring the sacrifices necessary to settle in a harsh land. Happily, a fifth book is planned tying together characters from the whole series.