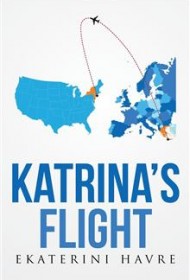 Growing up on the island of Crete, five-year-old Katrina lived with a dark secret: a 12-year-old neighbor boy sexually molested her on a regular basis, threatening to stone her to death if she told. “As years passed, I wished someone would sweep me away to take me to a different land –a different place—to start fresh!”

Katrina was 16 when she got her chance. A third cousin visiting from New York asked to take her back with him as his wife. Against her parents’ wishes, she accepted. Alas, what looked to her like freedom turned out to be anything but as her new husband and mother-in-law controlled her every move.

Katrina’s Flight, written a half-century later, chronicles her journey from childhood to maturity, from dirt roads to clogged highways, from barefoot bride without a high school diploma to divorced mother of two with an Ivy League degree. Through it all, despite time, distance, and therapy, the abuse and the shadow it cast never faded, resurfacing first on her wedding night when Katrina obsessed over “stories about girls that were returned to their family if…they were not virgins…”

What actually happened that honeymoon night is left to the reader’s imagination, as are specific details of the abuse that preceded it. The author reveals little, as if still bound by that childhood threat. Sadly, the book suffers from the omission of the very events that defined her life.

Additional challenges are posed by a tendency toward repetition and frequent, unheralded chronological shifts, as the story jumps from her retirement years to her early years in Crete and back again.

Despite its flaws, Katrina’s Flight offers charming descriptions of the island, its colorful inhabitants, and a vanishing way of life likely to resonate with readers interested in the immigrant experience. One can’t help but be struck by the contrast between Katrina’s life and the life she might have led absent the tragedy that changed everything.