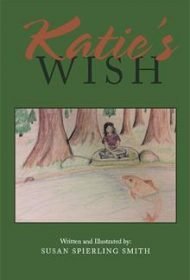 In Susan Spierling Smith’s middle-grade book, an orphaned young girl is sent to live with an aunt, who turns out to be horribly cruel.

When nine-year-old Katie’s parents are killed in an unspecified accident, she’s sent to live with her Aunt Clara, her only living relative. Katie is perplexed about why no one ever told her she had an aunt.

Her new home is an isolated, one-room cabin in the woods where her aunt forces her to work morning to night, cooking, cleaning, and fetching water from a nearby creek. She is often punished for mistakes by being sent to bed without supper.

During her visits to the creek, she watches the fish, and begins disclosing her woes to one in particular who looks at her with “understanding eyes.” Then one morning, “Carp” speaks, telling her that “King Crab” can help her. Carp turns Katie into a fish and they swim to the king, who gives her three pebbles, one to be dropped (and which will “instantly dissolve”) into her aunt’s coffee each morning. Katie wakes from what seems a dream and hurries home. The next morning, she finds the pebbles in her pocket.  Readers may guess the effect the pebbles will have—but not the surprise twist at the end.

Although the overarching story takes place in the modern world, it has the sensibility of magic realism, combined with the common fairy tale theme of a cruel witch who mistreats an innocent child. Smith’s writing flows smoothly with some lovely descriptions: “Large trees crowded in on either side of the rutty track with their branches looming out over the car like giant hands.”

Overall, readers may be drawn to the story’s originality and Smith’s smooth writing style, but better illustrations and copyediting would help the story reach a wider audience.