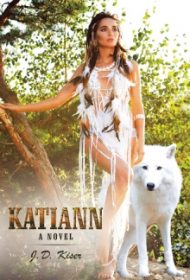 A young New York nurse’s unexpected inheritance lands her in a remote Native American village where her life is complicated by tribal versus religious beliefs and unexpected dangers in this imaginative romance novel set in the present day.

The story’s protagonist, Anna, receives a posthumous entreaty from her deceased grandfather requesting that Anna live for one year in an unnamed locale on land she now owns, noting that it has secret ties to her past. Once there, Anna encounters Mat, the tribal leader, who she finds as obnoxious as he is handsome. For his part, Mat considers Anna beautiful yet annoying.

The two grow closer over time, despite clashes when Anna becomes offended about the tribe’s sexual initiation of girls reaching puberty. She sets out to change this practice, despite major pushback. A strong Christian, she also is confused about the spirits who guide Mat and influence her thoughts. Mat, while attracted to Anna, is determined to keep his promise to his deceased wife not to love another.

Anna’s life becomes endangered when uncouth tribal enemies try kidnapping her, believing she is with spirit. Mat and his family’s lives are threatened while trying to protect her as they begin to understand her true connection to their world.

For a first-time novelist, Kiser has crafted a surprisingly well-plotted story. It blends intrigue, some foreshadowing and even humor with largely authentic dialogue, a solid sense of place, and the incorporation of Native American customs and spirit beliefs. While Anna and Mat’s flawless looks stretch belief, their characters’ actions are handily developed.

What doesn’t fit is Mat’s stilted, Tonto-like speech: “I no hurt you or take advantage. . . I tell truth. You trust me.” Meanwhile, other tribe members seem to speak nearly perfect English. Additionally, the book’s climax is a bit farfetched.

Overall, though, the story holds enough depth to make it an entertaining, casual summer read for romance fans.