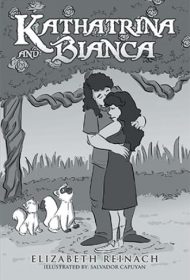 In this unusual offering, Elizabeth Reinach employs a sequence of 50 Shakespearean sonnets to describe a man’s strange relationship with two cats.

Petruchio, a chauvinist, has been rejected by his feminist girlfriend, Katharina. Dejected, Petruchio adopts two cats, Katharina and Bianca (the girlfriend and cat have the same name). Katharina, the cat, hunts at night, returning with the bodies of mice and rats. Bianca, “a whore with skills in bed,” makes love to Petruchio nightly.

As Petruchio spirals downward, the house fills with dead creatures, and Petruchio becomes a drunkard. Help is called in. The “Sanitary Department” cleans Petruchio’s house. The cats are sent to a “reformatory,” where they learn “not to accost men in their bed [sic]” and “to keep all prey outside.”

A psychiatrist analyzes Petruchio, concluding that the cats have “performed surrogate acts” in place of his human love, Katharina. Under the psychiatrist’s coaching, Petruchio learns to talk to the latter concerning feminist aims, and the two become “a loving couple.” (Although the author notes that the story is based on Shakespeare’s The Taming of the Shrew, there’s little, other than character names and Petruchio’s chauvinism, to reflect this.)

Salvador Capuyan’s black-and-white illustrations have a comic book flavor and promote the humor Reinach obviously intends. For instance, when the cats return from the reformatory, they are depicted with their tails jauntily clutching rolled diplomas.

The author’s language, however, is boringly prosaic. Instead of fulfilling the sonnet’s potential for scintillating wit, Reinach chooses a straightforward approach. Sometimes, even then, she missteps. In a stanza where the first and third, and second and fourth lines should rhyme, she writes: “Dr. Kahn entered Petruchio’s house/ Through the rusty door./ The floor was full of rats and mice./ He could invoke the law.”

Some readers will be offended by Reinach’s choice of subject matter. Setting this aside, the sonnets require revision with an eye to imagery, irony, impact, and poetic language to garner an audience.