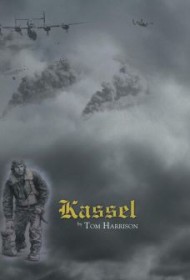 Kassel is a thought-provoking investigation of “the most intense aerial combat encounter with the greatest percentage losses ever recorded in military aviation history.” In a bombing run on Kassel, Germany, on Sept. 27, 1944, a group of 35 American B-24 Liberators inexplicably veered from the main group. Thirty-one were shot down. An official inquiry blamed navigational error in the lead bomber. The records were declared “Secret” and sealed.

Seventy years later, in an exhaustive examination of the facts about the B-24, its radar systems, the mission and the tribunal, aviation and WWII historian Tom Harrison offers a scientific and technical analysis of the event, coming to “an understanding of why the 8th USAF had to blame the lead bomber crew and conceal the truth,” though it knew a typographical error in headquarters’ orders was responsible. Harrison uncovered the cause of the deception — to shore up morale during a tough part of the war — after years of research and official confirmation.

The book is a treasure-trove of historical detail, meticulous maps, charts, diagrams, pictures of cockpits and instrumentation, and references — all well worth its downside of wordiness, repetition and overly technical analysis. This is not for casual readers; the author devotes a full 25 pages to radar, for example, while considering facts essential to his thesis.

Kassel is not a polemic. Harrison concludes: “It (lying) was undoubtedly an eternally painful choice to have to make, but they can’t be faulted for having to make it.” The book is a testament to bravery, self-sacrifice and the triumph of humanity over callousness, from the lead flight crew who gave their lives guiding their stricken group as far toward safety as possible before crashing to the Kassel citizens who raised a memorial to the dead airmen, instigated by a man who lost his entire family to bomber raids. Harrison shows that, though truth may be the first casualty of war, truth, not bombers, is the real Liberator.

BlueInk Heads Up: While highly recommended for libraries, WWII history buffs and model aircraft enthusiasts, academicians will appreciate the application of the scientific method to resolve the mystery.