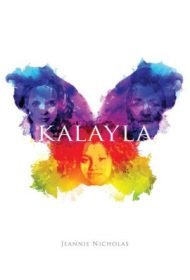 In Jeannie Nicholas’ novel Kalayla, the lives of three generations become intertwined when a young widow and her daughter move to Cambridge to start a new life.

After Maureen’s African American husband dies in a car crash, she moves with 11-year-old daughter Kalaya to an apartment building owned by Lena, an older wealthy woman who is also a widow. Lena, who has lost two sons in Vietnam and is estranged from two others, takes an interest in Kalayla and is soon paying her to do chores. This quickly leads to a friendship with Maureen.

Lena does what she can to teach some manners to the mouthy Kalayla, whose favorite expressions tend toward “what a pisser” or “cow turds.” She also helps make life easier for Maureen. But both women have painful pasts, and Maureen has a secret, the revelation of which will crush Kalayla.

Even while both women struggle with experiences from their pasts, the tale is generally upbeat with a hopeful tone, as characters discover new relationships and, in the case of Kalayla an unexpected passion.

This is a feel-good read, with characters who are generous in spirit and occasionally cantankerous. The struggles of both women are grounded in realistic events, including the fallout from Maureen’s inter-racial marriage and the abuse in Lena’s. Kalayla is an appropriately obnoxious 11-year-old whose big mouth and knee-jerk temper are eased by her good heart. Lena is just old enough to take it in stride, and Maureen, the young mother, is trying to get it all right, like many mothers.

There are a few minor editing errors, such as missing pronouns, but these distract little from the story.

An enjoyable, well-plotted read with an easy conversational tone, Kalaya is likely to be enjoyed by a wide audience.