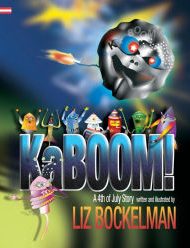 KaBOOM! is the first of a planned series of children’s picture books focusing on particular holidays. It chronicles a Fourth of July celebration from the perspective of anthropomorphic fireworks ready to be deployed, offering a message that encourages individualism and courage.

One Fourth of July morning, a gaggle of excited fireworks chatter about their forthcoming show. They decide on the order each should deploy, but then KaBOOM chimes in: “‘I know when I’ll go…I’ll sneak in the show WHEREVER THERE’S ROOM.’” His compatriots tell him he’s too noisy and will frighten the crowd, denying him involvement.  By night’s end, however, the crowd is upset about the show’s lack of noise, and KaBOOM launches himself to save the day.

The story, written in rhyme, suggests that individuals should be themselves and that diversity is important. This message might have been stronger if the other fireworks had eventually acknowledged KaBOOM’s value, but even without this moment, his worth to the crowd will be apparent to readers.

The accompanying illustrations, however, may prove problematic.  The pages pop with bold, three-dimensional artwork. However, while most of the fireworks are cleverly depicted, the people are shown with angry faces, grouped as a crowd in a way that seems ominous and eerie. Meanwhile, KaBOOM, with a seemingly evil glint in his eye, looks more like the villain than sympathetic underdog. Some young children may find these illustrations overwhelming and disturbing.

The book also includes a transcription of a news article describing the first July Fourth celebration (originally printed in 1777), a full transcription of the Declaration of Independence, and a few other materials. These aren’t presented in a way that will make them accessible to young readers, so their inclusion in the book is not immediately useful.

Awkward illustrations may distract from this book’s positive moral lessons, but those who relate to the colorful presentation will find that KaBOOM! offers a simple and engaging story that carries a hopeful message.