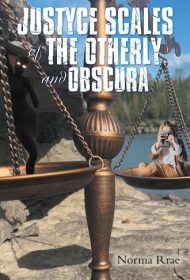 In this story, it’s Lucille Amberly Flask who makes an unexpected journey to another world. Luci is celebrating her sweet 16 with her mother, Ruth; they’re on a road trip that takes them through the wilds of British Columbia when Luci recognizes her face on a passing billboard. It’s one of the last sights she sees before her mother stops the car short in front of a menacing wall of fog, knocking her out in the process.

Luci awakes alone and soon finds herself lured into a strange cave, where a ghost woman sporting a face like a “broken porcelain doll mask” informs her that she’s been summoned to “The Otherly,” an alternative universe. Colorful characters, strange landscapes and mythic trials abound; among others, Luci meets Zavian, a type of creature called a Memegwaan, described as a “talking Easter Island statue.”

Through her interactions and travels through building-sized greenery, mystical lakes and more, Luci slowly learns her mission: To save her mother, she must face three trials and locate Keres, a mysterious woman who lives in the sky and holds the secret to Luci’s strange journey.

During her quest, Luci dodges dangers tied to Obscura, another plane of existence that holds its own threats.

Rrae writes with a fluidity and flair that makes her surreal vision of The Otherly come alive. Along with a seemingly boundless imagination, she brings a poetic sensibility to the story (her talent for simile, for example, shows in portraying the ghost woman with “red lips like overcooked pottery.”)

Indeed, the author’s skill helps make these fantastical circumstances feel approachable. While the book’s meandering, surreal pacing may be off-putting for more linear fantasy fans, those open to this structure will appreciate Rrae’s work.

The sheer scope of The Otherly, as well as a solidly sympathetic protagonist, make Justyce Scales a meaningful, immersive adventure.