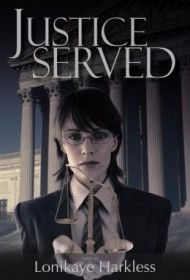 According to the back cover, this novel “is based on true events that the author researched and lived.” It revolves around a 1961 murder case in which a black man was coerced into confessing to the murder of a white woman, then promptly tried and executed.

In the book, the protagonist Joyce Hayes — who may be distantly related to the murderer, called Robert James in the novel — hears the story for the first time as she sits at the bedside of her dying mother. Determined to clear the family name before her mother dies, Joyce begins interviewing folks in her Southern hometown to get to the truth. Soon she finds herself threatened by strangers who tell her to stop her search – or else.

The author delivers some touching moments that have the ring of truth: Joyce’s struggles to accept her mother’s impending death, for example, and her relationship with her dysfunctional sister Vonetta. But there are just as many missteps: For instance, after Joyce is thrown in a trunk and shot at, her assailant — defying all believability — apologizes for “scaring her” and becomes a trusted source. In addition, the book is rife with copyediting errors, tense changes and the like, including two different spellings for a character’s name, both on the same page.

When the author sticks to the actual murder case, the book is at its best. Harkless may have been better served writing a factual account than this hybrid. But if readers push past the copyediting issues and overlook some of the more awkward passages, they’ll find the railroading of Robert James as relevant today as it was more than 50 years ago.