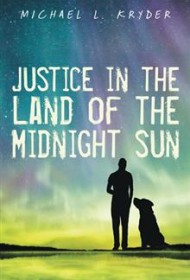 Michael L. Kryder’s Justice in the Land of the Midnight Sun is a suspense story revolving around Vietnam vets who embark on missions to exact frontier justice.

At the story’s heart is Dave Warren, an oil company executive and former member of the Army Special Forces. The father of adult daughters and on his third marriage, Dave is deeply in love with My Linh, a woman he met while on business in Vietnam.

When Dave isn’t working, he’s usually assisting his old military friend, Red, the leading law enforcement officer in Alaska, in his quest to exact frontier justice on criminals who weren’t properly punished or are on the run. Their justice is a harsh brand: In one case, they go after Olaf, a man who attempted to rape My Linh but served only a few months before being released from prison. Dave and Red take the handcuffed man out in a skiff, tie him to a 75-pound truck rim and lower him into the water. “They could see the terror in Olaf’s eyes. My court will not dismiss the case and let you go,” Dave says. “This is justice in the land of the midnight sun.”  As the story unfolds, their actions lead the CIA to request their help thwarting a terrorist plot, all culminating in a deadly shootout.

The novel vividly renders the Alaskan landscape, lending the narrator immediate credibility. And despite the macho characters’ severe vigilante actions, they only target criminals well-deserving of a comeuppance; Kryder, to his credit, manages to make the protagonists both sympathetic and believable.

Occasionally, the narrative feels stilted, “telling” information that would have been better rendered in scene. There’s also an extended flashback concerning My Linh’s backstory that confuses the story’s timeframe, as well as glitches in consistency, such as when the author describes a character as having a “handsome face,” then two pages later writes, he was “not handsome.”

Those who appreciate hyper-masculine characters and can overlook the issues mentioned will find skillful descriptions of the settings and a suspenseful plot that delivers the thrill of the chase.