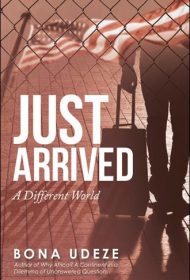 As Emeka Mmadunebo travels from Nigeria to the U.S. to study, he’s curious to verify all he has heard about American life. After an eventful journey, he arrives in Chicago and is hosted by his childhood friend, Ike. When he encounters wrongful arrests, high costs of living, and confounding cultural differences, Emeka is forced to abandon his glamorized expectations of the U.S. Still, his hard work and supportive community pull him through in the end.

As Emeka navigates his new world, his experiences feel authentic and offer readers insight into the challenges immigrants face when adjusting to a new country, including language barriers and cultural differences. It also examines the inefficiencies and corruption in African countries while lauding African values, such as regard for the elderly and a strong sense of community.

The narrative employs interesting, figurative language; for example, likening Emeka’s shivering during his interrogation at the airport to a cow being lashed by its owner on its way to the slaughterhouse. It also incorporates humor that plays on the cultural differences between America and Nigeria. For example, Chief Agu, a respected man from Emeka’s homeland, is frustrated at his son’s choice to change his name from William to Billy, a common name for a dog in Nigeria. The chief is also concerned about his son’s preference for hot dogs, which Chief Agu mistakes for actual dog meat.

While the narrative is told through Emeka’s credulous, entertaining viewpoint, it rushes his story towards the end. His experiences at school are brushed over and his transition from school to work and family life is hurried. This is unfortunate, given the success of the rest of the narrative.

Nonetheless, Just Arrived: A Different World is an amusing tale that readers will appreciate for its impactful lessons and funny scenes.