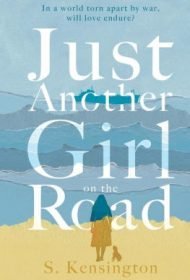 S. Kensington’s Just Another Girl on the Road is a captivating tale set in the latter years of WWII in which a young woman demonstrates strength and resilience and finds opportunities for love within the darkness of war and the light of liberation.

In Nazi-occupied France, German deserters brutally attack and kill Katrinka Badeau’s mother and stepfather, then capture and rape her. Ultimately, she’s rescued and recruited as a courier for a multinational resistance team headed by Major Wills Nye, a man who had worked aboard her father’s merchant ship and on whom she’s had a crush since her youth. Meanwhile, she also develops a passionate relationship with the team’s radio operator, Sgt. Wolfe Farr.

Tensions mount as Katrinka faces many dangers, including transporting explosive components in the false bottom of a market basket; being harshly interrogated by Gestapo authorities; even exchanging sexual favors with a shady food merchant to obtain much-needed nourishment for her team.

As the operative team disbands, Nye arranges a temporary job for Katrinka at a London news agency, and later she joins a USO entertainment troupe in the hopes of revisiting with Nye and Farr on their new military assignments. As the story unfolds, Katrinka must choose between the two men.

While the narrative progresses mostly chronologically, Kensington also visits Katrinka’s past: her childhood spent among sea gypsies of Burma and her free-spirited mother. Detailed and varied sexual encounters—from assault and barter to love and comfort— speak to Katrinka’s wild nature. But the excesses of her many sexual adventures—both in the past and present — tend to distract from the storyline.

As the war winds down, Kensington delivers surprise twists and brings happenings full-circle as the closing chapter moves ahead nearly 40 years, delivering a quiet meditative wrap-up about memories, life’s uncertainties, and the desire to follow ones’ heart.

This is a creative, absorbing novel about human connection in the face of war, with a heavy dose of sexuality.