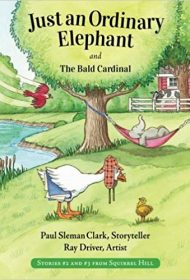 In the second installment in Paul Sleman Clark’s charming Squirrel Hill series for children, an elephant overhears someone call him “ordinary,” and later, his friends learn about his kind deed that reveals he really is special after all.

“Perfesser,” a know-it-all goose, comments to his son that many who live in their neighborhood are “ordinary.” Seeing Ellie, the elephant resting nearby, Perfesser calls him “the most ordinary elephant I’ve ever known,” adding that African elephants are special: “They are big…very big.” Their ears stick straight out, he adds, and they always wear straw hats.

Determined to be special, the distraught pachyderm pushes out his ears and goes hunting for a straw hat. The first one is too small, but the second, which sits atop a scarecrow, is perfect—except that a tiny spider lives there. The spider entreats Ellie to spare his home, and although Ellie is yearning to be special, he cannot bring himself to take the spider’s home. Word about Ellie’s kindness travels through Squirrel Hill, and even though Ellie was not very big, and wore no straw hat, “they all thought Ellie was very special indeed.”

Ellie is an utterly endearing character, and children will easily see through the blustery offending goose, who brings comic relief to the story. (For example, the supposedly smart “Perfesser” has trouble telling his children apart, so he calls them either Son or Daughter. “That way he sometimes got their name right,” the narrator informs us.) One wishes the elephant had come to understand his own specialness, as the others do—but that’s a quibble.

The book also includes another, much-shorter story about an act of selflessness the cat Kitty shows toward a bald bird.

As in book one, Clark’s appealing characters are original and well-delineated, and the stories include lots of sly humor, all enhanced by illustrator Ray Driver’s pleasing black-and-white drawings.

With this delightful offering, young readers will eagerly anticipate the next visit to Squirrel Hill.