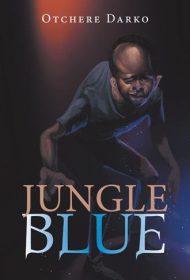 When a child is born with deformities, he seems doomed to a dark future, but his strong character leads him on an unexpected path in Otchere Darko’s novel Jungle Blue.

Amma Boahemaa and her husband Kofi Bana are a childless young couple living in the fictitious African village of Mankada and desperate to start a family. Searching for help, they visit a priest who tells them witches have cursed Amma, but soon they will have two sons, the first who will be born “very ugly.”

As predicted, the child is born with a misshapen body and oversized head, both covered in hair. They give him the Christian name John Brew, which a teacher misinterprets as “John Blue” and a second teacher teasingly changes to “Jungle Blue,” a name that sticks. The boy learns to hunt with his father and grows up to be the region’s best hunter and main supplier of bush meat to nine nearby communities. His success wins him numerous wives, each with whom he builds a family.

Jungle Blue’s stellar reputation earns him an invitation from the king, who creates a special chieftaincy for him—the equivalent of Minister for Development and Progress were it “a community of the White man.” But in time, forces beyond Jungle Blue’s control conspire to alter his good fortune.

The author writes with strong knowledge of African village culture and a natural storyteller’s voice that immerses readers in the narrative. He describes this tale as the first of two stories inspired by a colleague’s comment that if he were to be reincarnated, he would ask to be a “White man’s dog,” which Darko sees as “a bold denunciation” of his African identity and race. His story skillfully questions whether the colleague’s comment is justified as it examines the clashes of “inward” and “external forces.”

Thus, this intriguing tale will particularly appeal to readers interested in indigenous communities and the question of man’s ability to change his fate.