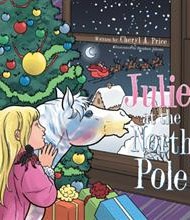 Julie at the North Pole is a children’s chapter book that celebrates the magic of Santa Claus.

It’s the week before Christmas and ten-year-old Julie Heart is itching for an adventure. Luckily, her magical stuffed pony Algonquin is of the same mind. Before you can say “Merry Christmas,” Julie, Algonquin and Mikey Bright—a talking spider tasked with being Algonquin’s guardian—head to the North Pole.

On their journey, the group confronts various dangers, and eventually Julie learns that children have stopped believing in Santa Claus.  As a result, Santa is thinking of quitting his work.   (Even Julie is doubtful he exists; the story reveals that she’s at the age when children’s ability to see Santa begins to fade.) Eventually, Julie devises a plan to save the day, using the Internet to prove to Santa that millions of children care about him after all.

Price has written a brisk holiday tale suited to young readers. Her narrative is crisply drawn with compelling struggles. While it shows some lapses in internal logic (i.e.: if Santa is real, why would his world be lost if people stopped believing in him, as the story posits?), the book’s format is its most significant obstacle to finding its audience. Although written as a chapter book, its 8”x8” size is typically associated with picture books, which may prove off-putting to an older audience.

Additionally, some of the color illustrations depict images inconsistent with the text. For instance, elves guarding the castle are described as wearing capes emblazoned with the letters “SC,” but on page 32, the letters don’t appear in the illustration. Meanwhile, an earlier adventure is mentioned repeatedly but it’s unclear if that story has been published; kids will want to know.

Julie at the North Pole shows potential but needs further polishing to shine. Even so, it may connect with some young readers who appreciate quest stories, particularly of the holiday variety.