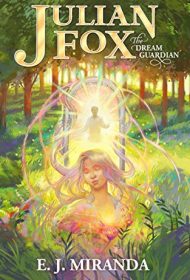 The realm of dreams is much more than mere fancy in E.J. Miranda’s fantasy Julian Fox: The Dream Guardian. In Miranda’s imaginative work, the world of nighttime visions is a battleground where forces of good and evil struggle for the evolution and growth of the human race.

The Land of the Wise Dreams (or the “Mikangly Greydalash”) is a place where Guardians appointed by superior beings fight Defilers (“the Eztraculty”) intent on destruction. The realm is connected to the human world through the dreams of individuals; with this avenue of communication, the Guardians can positively impact individuals by offering inspiration, wisdom and humanity.

The book begins as Julian Fox, a handsome, wealthy and accomplished 21-year-old, learns he’s one of those elite Guardians (“Kelsdrants).” With guidance from an unlikely ally from his time in university, Fox rapidly makes the transition from carefree college graduate to a warrior battling the worst of the Defilers.

The author mixes the everyday with the fanciful, offering a fairly exhaustive character study of Julian Fox. Even as Miranda creates a complex imaginary realm complete with a dense mythology and intricate vocabulary, the author focuses attention on Fox’s adversarial but loving relationship with his brother, Nicholas, as well as his relationships with his parents and romantic interests.

Generally, the story works well. At times, however, the author distracts readers with an attempt to be overly clever, descriptive and instructive, slowing the novel’s pace. Also, the aphorisms used to kick off chapters sometimes feel high-handed and overly philosophical. For example, Miranda begins one chapter with a lengthy comparison of prudence and impulse, maintaining that “The victor will either turn over its space to the calm or the confrontation. The choice will always be the responsibility of the free will.”

Overall, however, the author’s style fits this fantastical vision of a dream realm where heroes fight epic battles against storybook villains. The book provides a fun diversion for readers who enjoy such fanciful journeys.