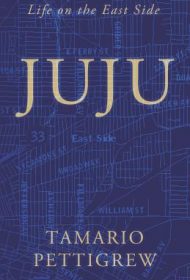 Tamario Pettigrew’s young adult novel, JUJU: Life on the East Side, tells a beautiful, yet at times horrific, coming of age story, set in the summer of 1986, when crack came to the East Side slums of Buffalo, NY.

Juju, or Julian Junior, is 13-years-old when his mother loses one of her three jobs and thus has to move him, his three younger sisters, and one brother just out of prison back to the ghetto, after living, for a time, on a safe, working class street. (He has two other older brothers, one in prison, and the other in the military).

When they first move into the neighborhood, Juju worries about his fate: “I knew there was things I was gon’ have to do if I wanted to fit in…I was worried about what kind of boy I’d have to be to survive.”

Juju does survive and makes friends, but, as feared, faces problems: An initial candy shoplifting incident grows into something worse, and Juju struggles to be true to himself while peers descend further into crime. An aspiring writer, he details the problems before and after crack came to town.

Juju’s observations are poetic, and his poignant yet matter-of-fact narrative sucks readers into his world: “Being a black boy is strange,” he writes. “…I just want to play arcade games and go hang out with my friends.  Outside, I’m a six-foot-tall, 140-pound black man.  People treat me different. They scared of me.” Juju considers it just another day in his life, even when discovering his friend’s prostitute mother, naked on the lawn or enduring violence from police and neighborhood gangsters. This ability to present such a challenging world in seemingly routine observations is one of the book’s chief strengths. That it’s beautifully written, with lyrical conversations and equally lovely yet disturbing descriptions, adds to the novel’s urgency.

This is a must-read for anyone who loved Toni Morrison’s The Bluest Eye. Given the graphic nature of some of Juju’s wry descriptions (of violence and occasionally sexual matters), it might not be appropriate for younger readers but should be on summer reading lists and in high school libraries everywhere.