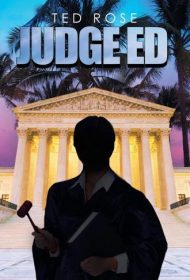 Judge Ed, wealthy from real estate investments, lives and works on a huge Florida compound, where he swims between his two pools through an underground tunnel and hosts the likes of Mick Jagger. He catapulted to fame when he presided over the trial of Dr. Benjamin Roth, a plastic surgeon accused of murder. Because of his celebrity status, Judge Ed now has his own courthouse on the compound grounds, to avoid overwhelming the main courthouse with spectators.

The book perches somewhere between a novel and a linked short story collection, consisting mostly of descriptions of Judge Ed’s compound (the focus of nearly a quarter of the narrative) and anecdotes about his career and relationships. The closest thing to a traditional plot comes in the last two chapters, when a man convicted in the judge’s court escapes prison through a deus ex machina occurrence and seeks revenge.

Rose delivers some entertaining moments (e.g., depicting the Roth trial as such a media circus that journalists are interviewing “everybody from a [sic] elderly lady walking her cat to two sewer-repair men who had just crawled out of a manhole”).

Overall, however, the narrative is highly disjointed. Rose introduces outlandish situations, such as Judge Ed presiding over a personal courthouse, but waits a disorienting number of pages before explaining them. Some vignettes, such as the judge’s encounter with Tom Petty, which includes a long digression about one of the singer’s fans, have little to do with the book’s overall themes. Often, Judge Ed feels like a collection of tangents, albeit some amusing ones, that fail to make a cohesive whole.

Although it contains some potentially interesting stories, Judge Ed requires substantial revision before it’s likely to appeal to a mainstream audience.