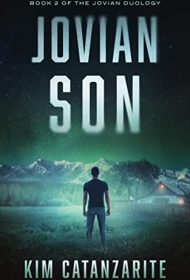 Kim Cantanzarite’s Jovian Son is the sequel to They Will Be Coming for Us, a gripping blend of science fiction, love story and thriller about the Jovians, a mysterious wealthy family in a small Pennsylvania town.

In the former story, Svetlana, a native Russian adopted by a Pennsylvania couple, falls in love with and marries Andrew Jovian and gives birth to a son. Soon, Andrew dies of a biological defect, and readers learn that the Jovians are aliens from Jupiter and Andrew was an experiment in their efforts to propagate on Earth.

Jovian Son picks up ten years later with Svetlana and her son Evander living in Russia with her also-adopted sister. Svetlana is hiding out from her late-husband’s family.

Although Evander is only ten, teenage girls fawn over the tall, handsome boy, and as the sequel begins, Evander rebels against his mother, going on a date against Svetlana’s wishes. When he doesn’t return, Svetlana learns that her in-laws have taken Evander, and she returns to Pennsylvania to find him. Staying with her adoptive parents, she slowly re-establishes contact with the Jovians, as well as Andrew’s best friend, an FBI agent who becomes her ally in finding her son.

Although this story can stand alone, it helps to read the earlier book first because this plot is interwoven with characters, flashbacks and references from that story. The first volume’s pleasures return here: likable, believable characters; a rollicking, dialogue-driven plot, and artful writing. Catanzarite has a talent for evocative similes, although she sometimes over-indulges. In one paragraph, she describes the scarf of a woman on her airplane flight as “bubbling like lava” from her collar, her carry-on luggage trailing “like a baby elephant” and her laptop luring her “like a warm loaf of bread waved under my nose.”

Regardless, Jovian Son takes readers on a thrill ride to a satisfying, though slightly improbable, denouement that echoes the original love story from the memorable first book.