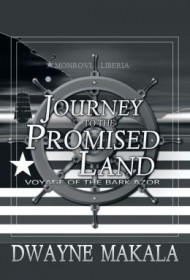 You’ve heard of the ship called the Mayflower, but probably not the Azor. History buff and new novelist Dwayne Makala wants to teach readers about an event their history professors likely never mentioned: the 1878 exodus of emancipated African-Americans to a new home in Liberia. Journey to the Promised Land: Voyage of the Bark Azor attempts to fictionalize the little-discussed post-war pilgrimage, though his tale often reads more like a textbook than the historical fiction he sets out to create.

Makala starts off engagingly enough, with the story based on the actual men, women and children who boarded the sailing ship, or “bark,” Azor on April 21, 1878, in Charleston, South Carolina for its maiden voyage to Liberia. Characters include an eager 13-year-old boy, James Tolbert; African Methodist preacher Reverend Thompson, confident captain Blake Carrington, and an assortment of mostly flirtatious women and ambitious men. The one person not on board is a doctor, which becomes a dire problem when sickness sweeps through the ship midway through the trip.

This could be a compelling tale of courage and survival that also illustrates the historical period. Too often, though, the momentum stalls as Makala turns entire chapters over to the political maneuverings happening back in South Carolina, or to reference-like entries on world politics. These diversions offer information that, while valuable, would be more digestible coming through the thoughts, words, and actions of the characters rather than as asides from the author. The writing style itself is awkward, with frequent grammatical errors, missing words, and confusing sentence construction. It’s a lot to navigate to get back to a story that never really gets off the ground.

Like the voyage it depicts, Journey to the Promised Land is a noble idea that holds much promise. Ultimately, though it lacks the attention to detail needed to make it all the way to its destination.