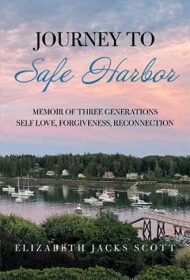 In Elizabeth Jacks Scott’s captivating memoir, she uncovers secrets about ancestors who shaped her family dynamic for generations.

When Scott, descendant of Irish shipbuilders and granddaughter of Baptist missionaries to India, inherits the family’s abandoned 1840s home, a renovated sail loft on the Maine coast, in 1975, the home triggers intense curiosity about her ancestors, particularly the women who lived there. She begins a journey to unlock the truth about her forebears.

Scott illuminates the suffering and loss experienced by Clara, Scott’s grandmother. Her “extraordinary life of sacrifice and willing deprivation” left her sickly and exhausted after bearing five children in India and losing three sons. Her obligations to her husband’s missionary career and to helping “those who suffered most” prevailed over her children’s needs. Scott’s mother, Betty, was sent to boarding school in India, where she suffered harsh treatment and little parenting.

This damaging mother-daughter relationship, posits Scott, began an “unhealthy cycle” of abuse, parental distancing and secret-keeping. Her privileged upbringing and education, motherly pressure and an empty first marriage leave her feeling alone and lost. After her husband’s death in a car accident, Scott begins spiritual studies and therapy, which eventually bring her self-confidence and the ability to accept love.

Scott’s journey culminates in an emotional 1995 trip to India, where she visits missions and orphanages founded by her grandparents and the backwater village where her mother was born and educated. Enthusiastically reclaiming her heritage and home in Maine, she ultimately unites past and present, and generations of hidden pain, suffering and secrets dissolve. Scott “had come home to myself, the safe harbor.”