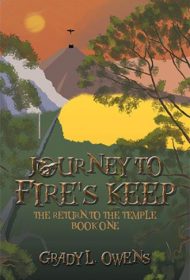 The core story of Journey to Fire’s Keep echoes familiar titles: Two heroes in a faraway, mystical world embark on an epic quest after their lives are upended by the evil deeds of an epic villain—a narrative structure straight out of J.R.R. Tolkien.

Here, those heroes are human Stephen Doe and half-elf Angelo Villalobos. In his search for magic materials, the evil mage Asmodeious Bruté completely destroys the pair’s town of Springsboro. Doe and Villalobos, the only survivors of the cataclysm, set off to seek vengeance.

Joined by Stephen’s brother, John, whose allegiance is suspect, they slowly make their way to Asmodeious’ castle on the slopes of the volcano Fire Mountain. As their quest progresses, the group encounters potential allies and enemies, including a council of magicians known as the Revered who hold the power of the world’s elemental forces.

The author writes in a straightforward, conversational style, delivering an imagined world full of magic and mysticism but framed in a contemporary lens. Asmodeious and his half-orc, sorcerer underling Diablo practice magic with the casual method of laboratory workers. And while Owens’ imagined universe features elves, unicorns, orcs and other fantastic creatures, it also features airplanes, movies, references to disco and contemporary curse words.

Owens manages to pack an impressive amount of intrigue and action into less than 200 pages. Although his marriage of ancient magic and modern conveniences can sometimes be jarring (a reference to “disco inferno” or a string of modern curses can take readers out of what’s supposed to be a faraway, fantasy world), his commitment to his characters give the story the cohesion it requires.

Journey to Fire’s Keep doesn’t reinvent the fantasy novel, but its creative approach is bound to entertain readers looking for a fresh take on a long-established formula.