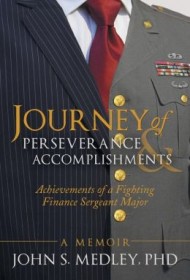 Journey of Perseverance & Accomplishments: Achievements of a Fighting Finance Sergeant Major is John S. Medley’s account of his life and career, mostly the latter as a proud member of the U.S. Army Finance Corps, which is responsible for seeing that troops are paid efficiently and that their families are cared for.

Medley went into the military out of high school and eventually achieved a doctorate in administration and management. In addition to his years of military service that took him around the world, his career included working in the business, civil service and academic worlds.

There’s no doubt he is an exceptional leader, evidenced by his methodical rise through the ranks. Journey also shows him to be a good teacher; his solutions to challenges he encountered provide useful lessons for the reader. One technique he employed successfully throughout his career is the behind-closed-doors meeting. He shows how the strategy facilitates solutions, writing “Open the door only when there is agreement,” and “Before the door opens, both must be on the same sheet of music (or page) – it does not matter whose.” That’s indicative of Medley’s astute approach to problems.

The author is articulate, his writing straightforward. At times, though, his narrative can be dry. Journey often reads more like a textbook than a memoir. Additional anecdotes, on the professional and personal level, would have addressed that.

He also uses a lot of jargon and acronyms – perhaps unavoidable when writing about the military – that can slow readers down. Fortunately, he offers a glossary of abbreviations and acronyms to help with sentences such as “The two teams commenced their reviews using the DA QA checklists, which were instrumental in improving the quality of the USAREUR command finance and accounting network.”

While Journey is not likely to appeal to a wide swath of general readers, overall, Medley’s memoir is an informative effort for those interested in the subject matter.