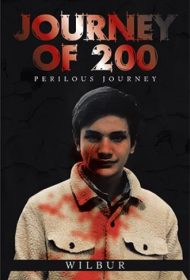 Wilbur’s Journey of 200 is a fantastical account of three siblings who venture on a path intended to lead them to a 200-year lifespan. In an odyssey that takes them from India to China, their travels are marked by a series of strange encounters and violent events that blur the lines of reality and mental stability.

After winning a robotics competition, a brother and his two sisters board a flight for their prize trip to India. Here, a deranged passenger claims he is en route to visit his 157-year-old grandfather. Subsequently, he advises them of a path— including a mountainous climb and a battle with a giant lizard snake—that, when followed, allows a person to live for 200 years.

Readers learn these adopted central characters hail from a dysfunctional home, marred by mental health issues. Guillaume, the brother, is riddled with anxiety and constantly bothered by intrusive thoughts. Catherine, the bullying sister, is prone to a violent temper, while traumatized younger sister Madeline finds solace in stroking her brother’s hair.

The siblings encounter an odd array of characters and perils, from a heinous attack by an elderly woman and a taxi driver’s stop at a zoo with animals gone awry, to armed military abductions, explosions, earthquakes, and horrific killings. Guillaume’s nightmare visions of aging add a cautionary element of a future world’s progress and demise as the story moves forward amidst jarring action.

While details lend a strong visual component to the narrative, they also detract: A diatribe of facts about India, or specifics of each photograph displayed in an old woman’s abode, seem excessive. A short epilogue provides closure to the story, although the simple summation is in sharp contrast to all that the characters have experienced. The story also contains grammatical and typographical errors.

Audiences drawn to fantasy and violence may appreciate the story’s intense activity and imaginative elements. Most, however, will find this a strange, dark, and incongruous journey.