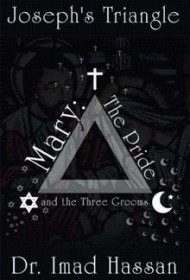 Since September 11, 2001, the world has become very sensitive and aware of the tenuous and sometimes tempestuous relationship that exists between Muslims and Christians. Yet, many in the Western world would be surprised to know that Jesus Christ is revered in the Muslim tradition — not as the Messiah, as Christians from all walks of life would attest, but as a great prophet.

In Joseph’s Triangle, Dr. Imad Hassan looks to explore the nature of Jesus and show how Romans and first century followers erroneously elevated a great servant of God to divine levels. Concurrently, he also explores the importance of the Virgin Mary and her betrothal and marriage to Joseph. Hassan’s intention is two-fold: to challenge Bible readers on Jesus’ messiahship and to provide an appreciative study that “will stand as a token of love and adoration for Mary, the greatest and most honored, admirable and remarkable woman in the world.”

In a series of short chapters, Hassan explores a number of discrepancies in the Bible, including the different genealogies of Jesus found in the New Testament that indicate to the author that certain information was deliberately created to fulfill a prophetic agenda. This, he posits, not only provides a disservice to the Jesus of Islamic tradition but falsely created the idol of Jesus in Christianity.

Hassan is a competent writer and his book is well organized. However, there are a number of grammatical and typographical errors and a few places where the wrong word is used. Further, Chapter 3, which takes its name from the book’s title, could have used more fleshing out to have the impact the author was looking to achieve. Had Hassan footnoted his sources and provided bibliographical material, it would have gone a long way toward backing up his arguments and giving the book wider appeal.