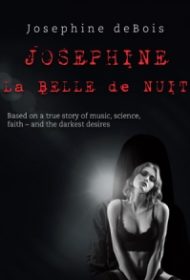 Elements borrowed from The DaVinci Code, Frankenstein and My Cousin Rachel intertwine in Josephine deBois’ screenplay/novel, Josephine La Belle de Nuit, as it asks a question about the nature of humanity: If a person is cloned, will that clone have a soul?

This story is written in a screenplay format, with deBois inexplicably naming the eponymous character, Josephine, after herself. As the tale gets underway, the author introduces brilliant 23-year-old conductor Ludwig, who gradually learns that he has been concocted from synthesized powder in a lab. His manipulative manager Josephine holds sway on every facet of his life. Her goal is not winning his heart, but rather his bank book.

Although Josephine insists that Ludwig marry her, he’s secretly seeing his true love Tiffany, a gifted pianist and Ludwig’s onetime music conservatory classmate. While Ludwig is internationally celebrated, he’s terrified that things might change once his true origin is revealed.

The story also brings in aborted fetuses, a feuding trio of cassock-wearing church acolytes who are responsible for the Ludwig-cloning experiment, flesh-eating blackbirds, and more.  (While the subtitle claims this is based on a true story, that seems impossible.)

The scattered plot has large holes and is mostly buried in recurring descriptions of high-end hotels, scenery, and attendants (deBois refers to them as “servants”). Much of the book entails pointless entering/exiting, doors opening/closing, wine and food service, and walks down corridors. Further, grammar is awkward (“learned them to sing”), words are repeated and misspelled (“sealing” for “ceiling,” Nobel “Prices”); and the syntax is faulty (“I’m sorry to hear your that.”)

Additionally, deBois misuses the concept of “action” which, in screenplay idiom, describes a simple physical act prior to dialogue, e.g., “She enters.” Here, action is treated as narrative that continues for pages.

Ultimately, the story falters under the weight of its many issues. Unfortunately, Josephine La Belle de Nuit delivers a largely frustrating reading experience.