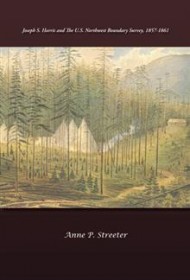 The 1850s were a busy time in the United States. In the aftermath of the Mexican War came the California gold rush, futile attempts to defer the slavery question, Indian wars, westward expansion, northern industrialization and the resolute march toward the Civil War. Lost in this torrent of events was the solution of the northwestern boundary issue between the United States and Great Britain, involving the border between Canada and what was then the Oregon Territory.

Anne P. Streeter fills that gap with entries from the unpublished memoir of Joseph Harris, her great grandfather and member of the American survey team, which she unearthed in her mother’s attic. These she embellishes with letters and diaries discovered at Yale from Harris and some of his companions, leading to a full portrait of hardship, resolution, adventure, and, ultimately, success.

Although the book is crowded with details that may interest few beyond professional historians (i.e. “Because of the .64 seconds difference …between the two Commissions’ measurements, … they started with different Azimuths ….”), the basic story is fascinating. We learn, for instance, about the chaotic early years of the Western migration, how rumors of gold disrupted the party’s scientific work, of changing relations with the local Indians, and of the role whiskey played in the expedition’s less rigorous moments. Probably most interesting to general readers are the atmospherics of time and place, as when suspected volcanic eruptions turn out to be giant trees falling in the forest, when the party witnesses a solar eclipse, or when Harris describes the grandeur of the Cascades and his struggle to fight his way through a blizzard.

Illustrated with watercolors and drawings by James Madison Alden, the expedition’s official artist, as well as with maps and photographs of many of its members, the book sheds light on a previously shaded corner of American history. Those who can get past the often-dense information will find much to consider here.