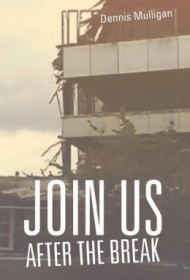 The Golden Age of television in Scotland was at least a decade after the U.S.’s, but the delights and disasters apparently were much the same – from drunken live television hosts, to malfunctioning equipment, to the terror of dead air. And underneath it all was the camaraderie of being part of something special from the beginning.

Author Dennis Mulligan joined Scottish Television Ltd. as a cameraman trainee in the late 1960s when TV was still black and white and variety shows ruled the day. In today’s world of instantaneous digital transmission, the seat-of-your-pants craziness of TV’s early studio days seems almost impossible. But in his loving memoir to a bygone era, Mulligan’s Join Us After the Break brings that time to life. Think The Dick Van Dyke Show meets My Favorite Year with a Scottish brogue.

Mulligan, who worked for STV for 34 years, is like the raconteur at a local pub who holds forth with the timing of a stand-up comic. You can almost hear the snare drum and cymbal clap at the end of each of his vignettes from the TV studio. Not often nowadays do you find a cameraman crawling onto the stage during a live ballet performance to get the orchestra conductor’s attention. Or see a rogue bear do his business all over the studio floor during a New Year’s Eve show.

Mulligan is clearly a skilled storyteller and writer. His wistful introduction about the day in 2007 when the studio building was torn down is lovely. The biggest problem with Join Us After the Break is it’s lack of structure. A collection of vignettes works—but only up to a point. Towards the end, the anecdotes become less crafted and feel more like slapped-together recitations of events. It’s as if he ran out of material—or maybe just steam.

Still, his book is worth a read, especially for those who are nostalgic for a simpler time in the world of television.