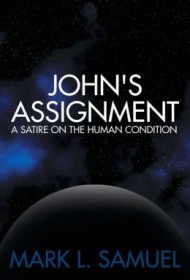 In this intellectual treatise on the human condition, an angel named John is given the assignment to consider the moral righteousness of earth’s inhabitants. Can individuals learn to fairly evaluate religion for themselves instead of following the traditions they’ve been taught? Can governments learn to assist rather than be an obstacle to the people’s religious understanding?

The Father sends John to six countries, covering all the major world religions. Each nation’s leader is challenged to re-examine the major tenets of the country’s religions and is given the opportunity to change his government in a way that allows its citizens the freedom to grow spiritually without overdependence on the government. Leaders who agree to the Father’s demands will be blessed; those who refuse will face annihilation, together with the masses.

As each leader searches for truth, they seek answers to many of life’s questions. In an attempt to find the root causes of poverty, oppression, and ignorance, the characters’ thought-provoking discussions range from a review of religious history and the rise of social classes to the modern topics of racial discrimination, illegal immigration, and evolution.

Any student of religion will enjoy the well-researched discussions. Each religion is treated fairly—and is both celebrated and critiqued. The author also demonstrates a thorough understanding of both religious and secular history.

Unfortunately, the author failed to have the manuscript copyedited. The book is rampant with punctuation, tense, and grammar issues. Spelling errors abound, including “angles” for “angels,” “sew” for “sow,” and “United State” for “United States.” This lack of attention to detail makes one doubt the quality of the research and will deter the intended audience.

With a professional edit, this book will delight intellectual readers. As it stands, it requires polish to reach its readership potential.