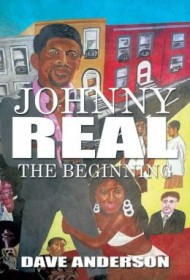 A boy who survives the rough streets of his Washington D.C. neighborhood rises up to become a private detective dedicated to stamping out crime and corruption in this unevenly plotted yet lively novel.

The story opens with a flashback to the army where Sgt. Johnny Real meets wife-to-be Carmella, also a sergeant. A second flashback takes Real farther back to the time he was a teen unafraid to avoid fights with the toughest in the ‘hood.

In the army, Real helps get to the root of a complex underground operation involving highly placed people who are secretly gun-running. Later, while working as general manager of a chicken franchise, Real decides to open his own private detective agency to continue his personal fight against wrongdoing.

Dave Anderson’s short, action-packed book, enhanced with simple black-and-white drawings, sports an imaginative plot. Many characters and situations are introduced that are efficiently tied together by book’s end. His characters are well-drawn, both appealing and menacing. In addition, the author handles the book’s conversational segments skillfully.

Unfortunately, the book is flawed by clumsy transitions to Real’s flashbacks and a penchant for switching abruptly from present to past tense. Word misuse, misspellings, garbled sentences and other key editing needs mar its execution. As well, some readers may be put off by the insertion of raw sexual commentary and salty language and also puzzled by three poems tacked onto the story’s end.

Nevertheless, this book has spark and a lot of promise, given necessary revisions to the structure and a strong hand at editing. Fans of the detective genre are likely to find the plot enjoyable and one that makes them look forward to the promised sequels featuring Real and his friends.