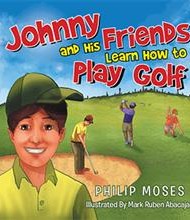 In Philip Moses’s debut picture book, Johnny and His Friends Learn How to Play Golf, four boys are anxious to learn the ins and outs of the popular sport.

Johnny and his three friends are eager to attend their first professional golf tournament. As soon as they arrive, Johnny’s father, cleverly named “Mr. Parr,” teaches the boys about tournament etiquette: no running, talking loudly or distracting the players. Johnny is amazed at the hundreds of attendees, and the boys marvel at the players’ exceptional shots as Johnny’s father points out their techniques.

Soon, the boys are enthusiastically immersed in the sport; they practice at the driving range and share the clubs that Johnny’s dad purchased. Moses does a fine job of explaining the techniques and physics of golf: pinching the ball, aligning the feet, opening the club face, addressing the ball, and explaining the different grips for putters and irons.

The illustrations support the text, but seem aimed at a much younger audience than the book’s sophisticated prose and advanced vocabulary would suggest. The pictures lack dimension, with few shadows or color gradations and almost no texture. In one section, Johnny’s father gives a long, detailed description about how to grip a golf club that’s tough to envision; an illustration would be a perfect accompaniment to clarify the text but isn’t provided.

Because of the emphasis on the rules, technique and play of the game, and less on a solid story with a plot, tension, climax and character development, the book seems much better suited as a how-to nonfiction book. With Moses’s knowledge and enthusiasm for the links, it would be a terrific guide for children and teens who have an interest in all things golf.

Nonetheless, children interested in the game will learn much from Moses’ story as it takes its characters from the excitement of a tournament to the day they enthusiastically play their first round of golf.