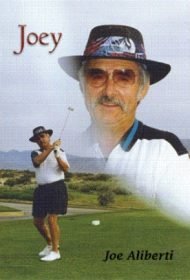 The genesis for Joe Aliberti’s autobiography was a visit from his grandson, who was curious about the family’s history. Aliberti couldn’t tell him much. His father, Guiseppe, was an only child who never spoke of his parents. And his mother, Maria, died giving birth to Joe in 1930.

Aliberti decided instead to tell his own life story for his family. The result is a memoir recounting his beginnings in the rural Northern California town of Davenport as the son of Italian immigrants, and the financial and personal success he ultimately achieved as head of his own construction company.

Life in Depression-era Davenport could be difficult for Joe, his brother and his cement-plant worker father. Making matters worse was Joe’s feistiness; there were run-ins with authority, fights at school and beatings administered by his father, who Joe believed blamed him for his mother’s death. But Aliberti overcame life’s obstacles through perseverance and hard work. He not only leaves his family with a valuable personal record, but also with an equally valuable life lesson: Never give up.

Joey is a straightforward, largely chronological autobiography that on occasion rises above the standard family memoir. For example, Aliberti writes poignantly about the loss of his mother. “We would be playing at the school yard and most of the moms would call their kids home for dinner or lunch…and that would leave me all alone. I would walk up to my house all alone, and sometimes it would hit me that no Mom ever called for me. I shed quite a few tears that no one ever knew about. No one knew but me how much it hurt.”

There are a few typos, and the author at times includes too many names of buddies or business acquaintances. The book features more than 40 photos.

While the personal nature of the book is likely to deter general readers, Joey offers Aliberti’s family a personal remembrance they’re sure to treasure.