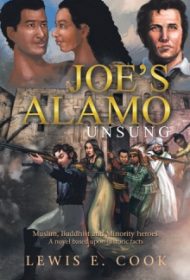 Real historical figures populate this tale that follows a slave named Joe to the 1836 Battle of the Alamo.

In Alabama, William Travis knows his prospects of winning the attentions of Rosanna Cato, the prettiest girl in the county, increase if he has his own slave. So he buys “Slow Joe” from a slave trader. Joe, the central character, turns out to be quite smart, and Travis teaches him to read well enough to help with Travis’s newspaper and law endeavors. Joe meets and falls in love with Emily, whose “brown eyes seemed suspended in a sea of innocence, like the white in a newborn baby’s eye.”

Although the Mexican government makes further American immigration illegal, Travis brings Joe with him to Texas (then part of Mexico) and begins thinking about the injustice of slavery. The Mexican government’s policy also doesn’t stop men like Jim Bowie and Davy Crockett from moving to Texas, and the story leads to bloody confrontation late in the book as General Santa Anna’s Mexican army marches northward to drive the Anglos out, culminating in the pitched battle at the Alamo in San Antonio.

The author pointedly includes various religions and ethnicities; Joe asks friends what a Jew is, and inside the Alamo are characters such as Mao (Chinese), Mohammad (a Muslim from India), a Buddhist, a Creek Indian, blacks, women and white men. Oddly, Joe fights for freedom, although Mexico has already abolished slavery.

The story is largely historically accurate, down to the existence of Joe, who was wounded but ultimately spared by the Mexicans. There’s one glaring error: a character describes Cinco de Mayo as celebrating Mexico’s independence from Spain. The holiday in fact commemorates an 1862 victory against French forces. The prose would also read a bit smoother with a more generous use of commas.

But the storytelling and characters are enjoyable, and readers will fret for Joe’s fate as he fights bravely alongside other defenders against overwhelming odds.