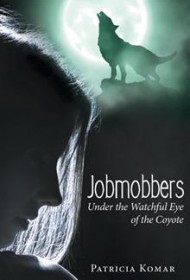 Bullying among children has received increasing news coverage, but the same behaviors can carry over into adulthood as well. In Jobmobbers: Under the Watchful Eye of the Coyote, author Patricia Komar uses workplace bullying as the catalyst for a fast-paced, surprising thriller.

Dawn MacGregor moves to Boulder, Colorado, when she’s headhunted by an aerospace company right out of college. Her fresh start in life begins to go awry on her first day at work; an established office clique makes it their business to ensure she’s miserable. They trash her office, which could be written off as a prank, but their tactics soon escalate and threaten Dawn’s work and, eventually, her life. Throughout the story, she watches and is watched by a coyote on her property; learning more about the behavior of coyotes and their role in legends helps guide her forward as things unravel.

Author Patricia Komar opens Jobmobbers with a bang that is disorienting — we’re thrown into a crisis with no idea what is happening — then comes back to it in a clever loop at story’s end. Dawn’s travails and her persistence in seeking help and asserting herself are handled with sensitivity while still keeping the suspense intact.

The choice to have head bully Arana Skudlarick narrate several chapters is one of the novel’s few missteps; she and her coworkers meet and literally spell out all the things they plan to do to Dawn, which spoils the surprise. If Arana’s reasoning came from some dark place that made for an intriguing subplot, the spoiler might be worth it, but she’s painted as a nasty person without an engaging backstory. Setting her point of view aside would open up questions as to whether Dawn was telling the truth or not and make the story even more chilling.

That’s a minor quarrel, however. Overall, Jobmobbers deftly combines a page-turning thriller with a provocative topic that should be discussed more openly.