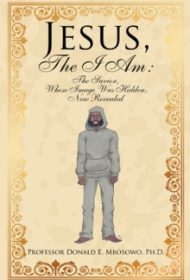 In Jesus, The I Am, Professor Donald E. Mbosowo chronicles the teachings he acquired from a spiritual vision he received in 1993 of the true Jesus. Although it took years to fully accept what was revealed to him, Mbosowo came to see that thousands of years of religious history and commentary had hidden “the real image of Jesus as an African,” a savior who came to free Africans from “spiritual and religious slavery.”

In a series of strongly worded polemics critiquing Christians, Jews and Muslims, the author looks to blow away the smoke he believes these religions have used to prevent humankind from seeing “the clear picture of who Jesus is…the I AM.” “I AM” here refers to the name of the real creator of the universe, a name revealed specifically to Moses from the Almighty himself.

As Mbosowo claims, Moses wasn’t a Hebrew either. He was an African who was commanded by I AM to free Africans from Egyptian bondage, which the professor posits had lasted for “almost a million years.” Conspirators over time—mostly Jews and Arabs, the author suggests—were responsible for changing facts, which spilled over into the New Testament. For instance, he says that the Jesus Christ of the Gospels is not the true Jesus but essentially a descendent of Lucifer, a fraud who distracted people from the I AM who wanted to show his chosen people how to escape oppression.

Most readers, theologians, and historians will find Mbosowo’s book provocative and confrontational, and his rhetoric challenging, to say the least. The professor uses few outside sources to back up his claims, and his vision causes a conundrum: If almost all of religious history is wrong, then there’s little one can do to support this vision. Hence, readers will find a narrative heated by a magniloquence that often feels confusing and unsupported by mainstream scholars—a presentation more likely to frustrate than edify its audience.