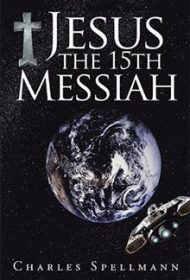 This ambitious but flawed work of speculative fiction blends science fiction and Christian mythology in an epic story that reimagines everything from the creation myth to the Christ myth.

Thousands of years before the birth of Christ, an alien spaceship crewed by humans from another galaxy crashes on Earth. After being marooned on the planet for years, the crewmembers begin interacting and reproducing with the planet’s primitive people. Centuries pass and the ship’s captain Aladam, female doctor Evaze, and the rest of the stranded crewmembers eventually die and pass into legend—but not before leaving their mark on the planet in the forms of massive monuments.

Fast-forward 5,000 years: Two men are sent from the Xerxes Galaxy on a mission to Earth to surreptitiously chronicle the rise of a messiah named Jesus. Also sent to the planet is an assassin named Derxter whose goal seems to be to destroy Jesus as well as the two spies following him.

The narrative’s major failing is the first half, which is convoluted and hard to follow. Before the novel even begins there’s a sequence where seemingly benevolent, non-human, aliens discuss seeding planets inhabited with sentient life with messianic figures. “I suppose that is what our task is all about: setting up a hope for these poor creatures.” But questions abound, including: Why are the aliens interested in giving people hope? And why do people need a messiah to have that hope?

Thankfully, once the action and adventure begin, the story’s readability increases dramatically, and the latter half of the novel is fueled by nonstop action and a relentless tension that powers the narrative to its thematically profound and metaphysically intriguing conclusion.

The weak beginning is a deterrent. But those who persevere will eventually find a thought-provoking exploration into the nature of faith and the future of humankind in these pages.