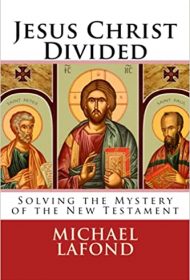 In this intriguing, thought-provoking work on the historical and theological development of Christianity, Michael LaFond argues that what we know as Orthodox Christianity is “mostly of Pauline origin.” This is not necessarily surprising, as LaFond points out that the “oldest Christian texts are the fourteen letters of Saint Paul.”

However, problems arise as Paul was often conflicted about his own beliefs, sometimes offering varying points of view through his various epistles. Although some of these contrary thoughts may have been inserted by editors, they have still traveled down through centuries, resulting in a faith that can be confusing and bewildering. As the author writes, Paul had enough confidence to offer different views of Jesus, “but he did not have enough confidence to insist on any single projection of the meaning of Christ.”

One of the outcomes of Paul’s divided viewpoints is an ambiguity that has trickled down over the years, so much so that “conservative” New Testament scholars have distanced Jesus from his divinity, leading to confusion and uncertainty. By examining Paul’s letters one by one and in chronological order, LaFond looks to reclaim some of what may have been lost over the years.

Jesus Christ Divided is erudite and well-researched. LaFond’s arguments are methodical and astute, and he demonstrates a firm grasp of Christian theology. When discussing the writings of James and the possible real identity of villain Simon Magus in the Acts of the Apostles, LaFond takes on the role of theological detective, demonstrating his skills as a logician.

This is a fine book with much to offer. While some scholars will balk at his interpretations and conclusions, that’s the point: LaFond intends to challenge the status quo of many historians and theologians who take the divine out of Jesus. His position is well argued and will appeal to those seeking to learn more about Paul and his role in the development of Christianity.