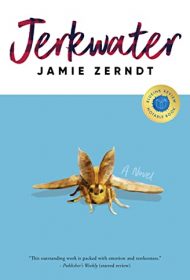 Jamie Zerndt’s fourth novel, Jerkwater, is an emotionally intense, character-driven story about the intertwining lives of three likable protagonists in the throes of grief. Exploring friendship and enmity, rage and harmony, and retribution and liberation, the novel is by turns harrowing, comical, and heartwarming.

Set in the “jerkwater town” of Mercer, Wisconsin, hostilities simmer between the town’s whites and Native Americans. Shawna Reynolds, an Ojibwa, seethes. Her mother was murdered by her white stepfather, and someone just injured her beloved horse. Her stepfather’s friend, a beer-bellied bigot, becomes the object of Shawna’s white hatred.

Shawna’s ire doesn’t extend, however, to her white neighbors, Kay O’Brien and her son, Douglas. Shawna and Douglas graduated high school together “a few years back.“ They are companions when embroiled in acts of justice and destruction or when simply sharing a drink and conversation.

Kay grieves her husband’s death and numbs herself with Manhattans. When she discovers a trove of Norm’s secret poems, Kay is upended by betrayal. Diagnosed with Alzheimer’s, Kay’s good-natured acceptance entertains. However, Zerndt’s exceptional prose dramatizes Kay‘s dread over her clouding mind.

For his part, Douglas is besieged by guilt over his father’s demise. A fledgling romance with Jenna, the new-to-town, beautiful artist, moderates his rumination. And Marty, his uproarious, sentimental coworker, provides comic relief.

Mercer is a boating and fishing community, and its lake occupies a distinct and effective presence in the novel. It is ever-darkening and seemingly bottomless, a symbol of the characters’ overlong agony. Townspeople fish there, and it’s where the characters meet, ponder, and find catharsis.

Zerndt’s tightly plotted storyline is told in alternating chapters from the characters’ perspectives. His prose aches in the telling. Kay and Douglas’s mother-son relationship comprise many of the novel’s poignant moments. Zerndt’s character development triumphs, especially that of Shawna, who unleashes vengeance in a gruesome ritual.

All told, readers will find Jerkwater a superb portrait of resilience and the redeeming power of friendship.