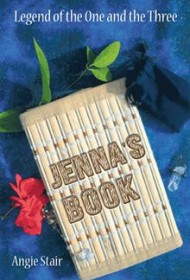 Angie Stair doesn’t waste any time getting to the action in Jenna’s Book, a straightforward, charming take on familiar conventions of the fantasy genre.

After a brief introduction dealing with the heroes and villains of a fantasy realm where wizards, dragons and magic are commonplace, Stair introduces a protagonist that is much more relatable to contemporary readers. Jenna seems like a typical American wife and mother of three daughters, but she boasts some remarkable traits. Specifically, Jenna wields a rare form of magic that she properly realizes only after a visit from a mystical creature from another world.

That elfin creature is Doneldo, a self-described “brownie” who appears to Jenna without warning. Doneldo’s world is in grave danger, he explains, and a long-held prophecy places this world’s survival squarely on the shoulders of Jenna and her three daughters, all of whom possess a similar brand of “wild magic.”

Doneldo is convincing, and Jenna travels with her daughters to a world where the wizard Alfordo is in the midst of an epic battle against his evil counterpart Greytower. The quartet runs into a cast of colorful characters fitting any good fantasy, a roster that includes knights, monsters and a stubborn dragon named Loragg. They all contribute to a story that revolves around an epic battle between the forces of good and evil, one that’s left open for future installments.

It’s a basic story structure that should ring familiar to readers of J.R.R. Tolkien or any of his myriad disciples. But while it’s obvious that Stair is steeped in the literary tradition of her forebears, she manages to inject some novel takes into a genre that’s seen plenty of recycling and repetition. Specifically, Stair’s careful characterization of Jenna and her daughters adds a new layer to a familiar plot structure. Along with her vivid narrative style, that element is sure to offer a compelling and fresh touch for long-time fans of the fantasy genre.