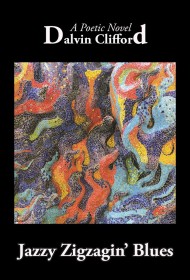 Teen and young-adult readers will enjoy this lively first novel about the perils and joys of growing up black in Sacramento, California, the hometown of author Dalvin Clifford.

The story follows feisty heroine Mary Harrison. Clifford introduces her as an uncertain 11-year-old in 1980, then charts her bumpy progress through adolescence, her emergence as a published poet and mentor, and her journey into the satisfactions of marriage and motherhood. The text is interspersed with heartfelt verse “by” the protagonist, her transformative teacher Dave Harper and others—a nice counterpoint to Clifford’s prose.

Mary Harrison prevails in her journey and ably defines herself, but some in Jazzy Zigzagin’ Blues‘ intriguing cast of characters aren’t so lucky: Mary’s lifelong girlfriend Rudy Short Shorts falls prey to temptation and violence; young Rainbow Duggs is plagued by guilt over a bad decision. Among the grownups, Mary’s mother, Anita, is hamstrung by religious moralism, while Rainbow’s dad, Wade Duggs, has to grapple with a failing marriage and his wife’s secret abortion.

Young Clifford hasn’t yet developed the vision or the verbal dexterity of a mature novelist: For now, he tends toward caricature and sentimentality (“She carried herself with the grace of a queen”). But this vivid — if somewhat tentative — cross-section of African-American life in Sacramento, complete with family skeletons and social conceits, concerns with skin-shade and hair-texture, petty gossip and brave striving, reveals a precocious grasp of life’s contradictions and—most important—the deep yearnings of the young.

Some scribblers never get so far, and Clifford’s portrait of a young woman discovering what her wise and beloved Aunt Aditi calls the “miraculous light” of life announces a writer of great promise.