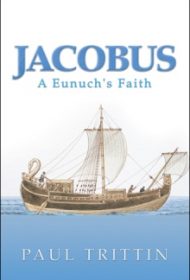 Jacobus: A Eunuch’s Faith illustrates the life of a eunuch during biblical times, using the author’s bold interpretation of New Testament bible verse Matthew 19:11–12 to weave his narrative.

The story’s Preface, written by Rev. Dr. Marvin G. Baker, offers his brief history of eunuchs throughout time. Baker claims that Jesus saw eunuchs as belonging to three groups: men who “from birth …either had no inclination or were physically unable to cohabit with women”; those who “had been made unable to reproduce”; and those who remained chaste out of service to God.” Baker claims that Jesus excused such men from marriage and the Jewish dictum to be “fruitful and multiply.” This controversial reading of the scripture forms the foundation of the story.

Jacobus, the protagonist, begins his reflective tale from the vantage point of age 70. Born a twin who is a “natural” eunuch (uncut), he soon discovers an attraction to his brother. This same-sex attraction provides the story’s cornerstone, and throughout, Jacobus relates his many sexual adventures as he’s apprenticed in his family’s shipping business and eventually becomes a highly successful merchant.

An encounter in Jerusalem during Jesus’ crucifixion and resurrection profoundly affects Jacobus. His professional life then leads him to India, cementing his life’s work in the Indo-Roman trade route. Ultimately, readers glean that a large number of men in the era were eunuchs.

While nearly 500 pages, the narrative’s whip-like pace impacts character development; the slaves initially entrusted to Jacobus, and his eventual lovers, are relatively interchangeable in description, and the characters continually experience extreme reactions (gasping, sobbing, weeping)—a heightened level of emotion that becomes wearing. The story is also replete with grammatical errors and continuity issues, e.g., referring to one main character as both Stephen and Steven.

Those who agree with the author’s biblical interpretation may overlook the story’s flaws and enjoy this tale. But for most, the aforementioned issues will render the story a read of limited appeal.